Abstract
Background and Objective: There has been a great deal of attention on the use of herbal feed additives for replacing the utility of  antimicrobial agents. The objective of the present study was to investigate the effect of adding KimchiStoc to drinking water on the histological and ultrastructural changes of the villi in the jejunum of broiler chickens.

Materials and Methods: Fifty one-day-old broiler chickens, strain Cobb, were used as experimental animals. Chickens were randomly allotted into control (K1) and treated (K2) groups. K2 received a 0.2% water additive (KimchiStoc) in their drinking water for 5 days consecutively every week for 5 weeks. At the end of the treatment periods, the chicks in each group were killed by cervical dislocation and necropsied and jejunal samples were collected for
histological and ultrastructural analyses.

Results: Based on the description of the jejunal histopathology, the best results were found in
the treated group. In the ultrastructural study, although there were no significant differences (p>0.05) between treatments for villi width; the height and the density of the jejunal villi in the treated (K2) group were significantly (p<0.05) higher and more dense compared to those in the control (K1) group.

Conclusion: KimchiStoc increased immunomodulation through hyperplasia of lymphocytic cells, which allows it to prevent infection in poultry. KimchiStoc increases the height and density of the jejunal villi which helps maximize digestion capacity and growth performance. Thus, KimchiStoc can be used as a substitute for growth promoter antibiotics. 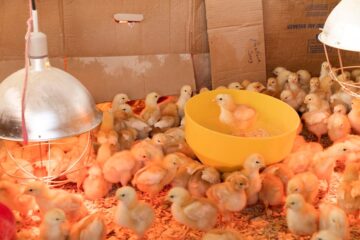